Because we cannot meet in person right now, there is a weekly Zoom meeting that is open to any amateur radio operator or anyone that is interested in amateur radio. This is not a club sponsored event and is open to everyone. It happens every Wednesday at 6:30pm EDT and we go to at least 8:30 and sometimes longer

Considered by many to be one of the best HamFests in our area the Berryville Hamfest, sponsored by the Shenandoah Valley Amateur Radio Club, is scheduled for Sunday August 4th 2013.  The Hamfest is held at the Clarke County Ruritan Fairgrounds in Berryville VA, about a 45 minute drive from Frederick.  Additional details are available at http://www.shenvalarc.org/hamfest. 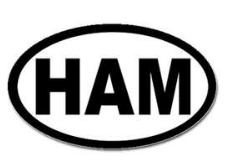 Would you like to become an Amateur Radio operator? It’s not difficult to do. Amateur Radio operators, often called “hams,” are licensed by governments around the world to use specific ranges of radio frequencies. The entry-level license in the United States, the Technician class, is all that is necessary for local routine and emergency communications. To obtain this license, you need only pass a 35-question multiple-choice written licensing exam for which all the possible questions and their answers are public information. You need not be a US citizen, though you must have valid photo identification, and there is no lower or upper age limit. Knowledge of Morse code is no longer required for any US Amateur Radio license. Though the license itself is free, there may be an examination charge of up to $15. License renewals, required every ten years, are free for most hams and do not involve an exam.

Information about becoming a ham radio operator is also available from the American Radio Relay League (ARRL), the national association for Amateur Radio in the United States.

With this in mind, N3FJP has created an Exam Prep Kit – Windows Based, that will run you through the questions you are going to see on the test.  It is a FREE program, and available here: HAM_Test_Prep_N3JFP

Field Day 2013 was largely a success in my view.  We had several inquiries about what and how we do things, visits by ARRL and FEMA representatives. Also several visiting former or prospective new HAMS.

While we will not win any contesting awards, nor were we seeking to, we did have over 150 contacts, and got to show the public what we do.

We did have plenty of literature from the ARRL and ARES ready to hand out, so information was available.

We carted in the trailer tower, and that setup went quickly, and the antenna was raised up to about 32 feet, which was tall enough to clear surrounding buildings. The vertical worked well.  Also setup was the Carolina Windham long wire.

Lessons learned:  Due to some technical glitches, the networked logging computers, we not quite operational, so different bands were used on the radios, and one logged by software, and one by paper, and were then combined.  We will work on the issues, and have a full setup ready for next year.

Photos available, and you can send more to me if you have them and I’ll post them. Available photos can be found here:

Frederick, MD 6/21/2013 – Despite the Internet, cell phones, email and modern communications, every year whole regions find themselves in the dark. Tornadoes, fires, storms, ice and even the occasional cutting of fiber optic cables leave people without the means to communicate. In these cases, the one consistent service that has never failed has been Amateur Radio. These radio operators, often called “hams” provide backup communications for everything from the American Red Cross to FEMA and even for the International Space Station. Your Town’s “hams” will join with thousands of other Amateur Radio operators showing their emergency capabilities this weekend.

Over the past year, the news has been full of reports of ham radio operators providing critical communications during unexpected emergencies in towns across America including the California wildfires, winter storms, tornadoes and other events world-wide. When trouble is brewing, Amateur Radio’s people are often the first to provide rescuers with critical information and communications. On the weekend of June 22-23, the public will have a chance to meet and talk with Frederick County Ham Radio operators and see for themselves what the Amateur Radio Service is about as hams across the USA will be holding public demonstrations of emergency communications abilities.

This annual event, called “Field Day” is the climax of the week long “Amateur Radio Week” sponsored by the ARRL, the national association for Amateur Radio. Using only emergency power supplies, ham operators will construct emergency stations in parks, shopping malls, schools and backyards around the country. Their slogan, “When All Else Fails, Ham Radio Works” is more than just words to the hams as they prove they can send messages in many forms without the use of phone systems, internet or any other infrastructure that can be compromised in a crisis. More than 35,000 amateur radio operators across the country participated in last year’s event.

“The fastest way to turn a crisis into a total disaster is to lose communications,” said Allen Pitts of the ARRL. “From the earthquake and tsunami in Japan to tornadoes in Missouri, ham radio provided the most reliable communication networks in the first critical hours of the events. Because ham radios are not dependent on the Internet, cell towers or other infrastructure, they work when nothing else is available. We need nothing between us but air.”

In the Frederick area, the Frederick Amateur Radio Club, and the Frederick County ARES group will be demonstrating Amateur Radio at the right side of the parking lot of the 7400 Guilford Drive “Walmart” on Saturday and Sunday, June 22nd and 23rd. They invite the public to come and see ham radio’s new capabilities and learn how to get their own FCC radio license before the next disaster strikes.

To learn more about Amateur Radio, go to www.emergency-radio.org.

The public is most cordially invited to come, meet and talk with the hams. See what modern Amateur Radio can do. They can even help you get on the air!

FARC is a non profit amateur radio club that operates off of just member dues and donations.

By continuing to browse the site you are agreeing to our use of cookies.