Want To Get An Amateur Radio License?

The Frederick Amateur Radio Club would love to help you get started on an exciting new adventure. Using the buttons below use the More Info button to learn what the process is to get licensed. For resources on learning how to study to get your license click on the Resources button. Once you are ready to take the test you can typically find a few testing sessions with 50 miles every weekend. We can help you find a location to take your test. If you or someone you know (hint hint) wants to get an Amateur Radio license now is the time. 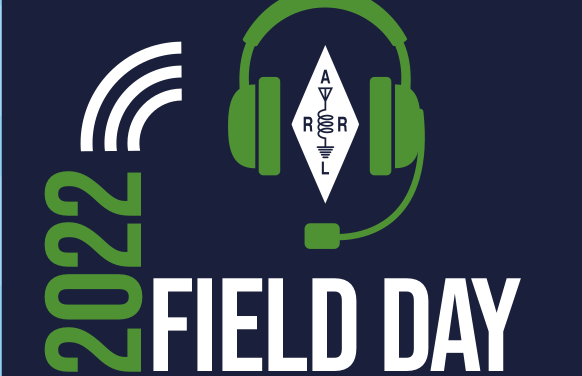 Field Day 2022 Was A Magical Success

Field day 2022 will be remembered as the magical weekend at Remsburg Park. This year we set up a plethora of antennas. Our antenna farm combined two HF verticals plus the club tower and horizontal wires covering 80-6 meters. VHF-UHF was also covered with a tall jpole on a mast and various other portable setups. 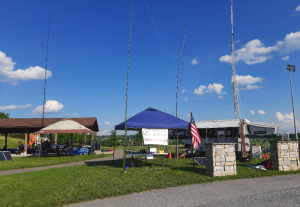 The club tower went up without a hitch and the old Cushcraft came together and radiated on all bands  with only touch-up tuning. 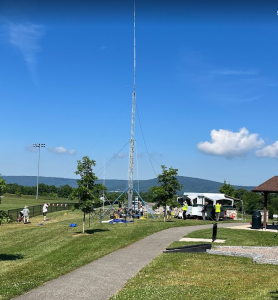 This year we added a touch of magic by having two of the three HF stations go completely solar powered: 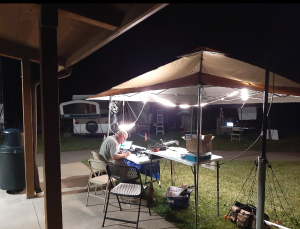 The desktop computer and ethernet required AC as well as the camper air conditioning and freezer/refrigerator. However, the two HF rigs and laptops outside under canopy pop-ups operated 100% solar power. They charged 35-50 AH batteries during the day, as well as running the radios and laptops. During the night the radios and laptops operated on the large batteries, drawing the voltage down to 12.6 volts by the morning. Voltage regulators kept the radios happy at 13.8 volts. The morning sun re-vitalized everything to repeat the cycle. 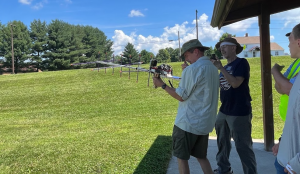 Satellite/ISS operations were in full swing this year thanks to Steve W3ATN. Despite several conversations via the ISS repeater and one actual QSO with a real live astronaut a few days before, field day contact with the astronauts was completely swamped by all the competition. 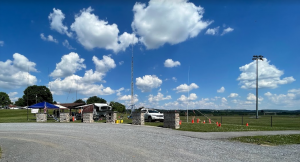 The weather this field day was absolutely gorgeous with plenty of sun, no rain and just a slight breeze to cool things off. There were plenty of happy operators having fun, trying out new gear and practicing for off-the-grid communications should the need ever arise. 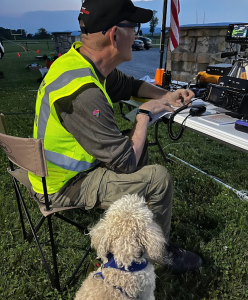 Copying the field day message from W1AW via RTTY and supervised by a furry friend. 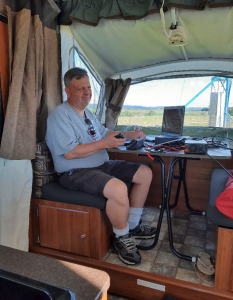 Tony, KC3MBE, making the contacts in a trailer thoughtfully provided by Josh, K3BZZ. 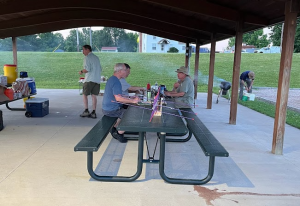 Brauts, burghers, and hot-dogs were cooked to perfection courtesy of Steve, K3STE. 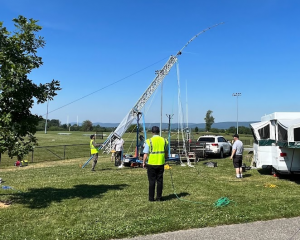 All too soon it was time to take down the masts, pack-up and head for home.

We are back in person! The FARC meetings have resumed at the Frederick Fire House on 310 Baughman’s Lane (park around the back and enter through the back doors). We had a great last couple of meetings and included a zoom presence for those who couldn’t attend in person this last meeting. This worked so well we plan to continue this practice.

See everybody there, in the real or virtual next third Monday of the month at 7pm.

The Frederick Amateur Radio Clubs very own Sandy KB3EOF and Steve KC3MAU have designed and built Delta Loop antenna for GMRS.  You can build one too…  The video below walks through how it was designed and how to assemble it as well as how it performs.  Be sure to like the video and give it a thumbs up!

The Frederick Amateur Radio Clubs very own Three Amigos (Sandy KB3EOF, Steve KC3MAU and Kurt K3KOH) have designed and built a dual band J-Pole with very low SWR.  You can build one too…  The video below walks through how it was designed and how to assemble it as well as how it performs.  Be sure to like the video and give it a thumbs up!

FARC is a non profit amateur radio club that operates off of just member dues and donations.

By continuing to browse the site you are agreeing to our use of cookies.